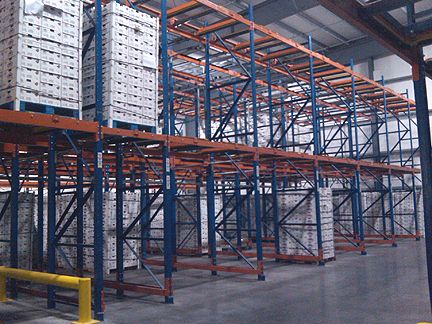 Description of Customers Challenge:
Allan Brothers is a fruit packing company that provides apples and cherries for large retailers across the United States. The company had been considering expanding its cold storage capacity for more than six years, but kept getting delayed in its decision. In 2010, however, the company built a new cold storage warehouse and decided that the time was right to expand its storage. Allan Brothers initially considered an Automatic Storage and Retrieval System, but didn’t have the budget for it. The company called Eric Anderson, territory manager at DACO Corporation (Kent, WA), who has been their material handling distributor for more than a decade. Allan Brothers wanted to expand to 2,500 pallet positions to allow for future expansion.

Solutions Explored:
Anderson called Adel Santner, regional sales manager at Advance Storage Products. "Having worked with Adel for several years, I knew that Advance would be able to do the job on time and with no issues." Together with Santner and DACO Sales Engineer Justin Cox, Anderson presented a drive-in pallet racking system with two levels of pushback rack above it for cold storage.

Advance provided structural engineering for the pallet rack system, which included double-wide drive-in bays, 306 lanes of four-deep pushback, 126 lanes of three-deep pushback and 32 lanes of two-deep pushback that increases Allan Brothers' efficiency for storing and rotating SKUs. The project cost more than $400,000, but as Anderson says, price was only part of the concern. "This wasn’t simply a price project. Having worked with DACO for more than ten years, Allan Brothers knew they were getting an experienced installation crew and a solution that would fulfill its needs."

Resolution & Benefits from Solution:
The customer appreciated the additional considerations that DACO and Advance Storage provided. The drive-in pallet racking was equipped with column doublers to reinforce the columns and increase safety in the drive-in bays.

Aisles were fitted with rub-rail guards to prevent damage as forklifts enter the bays. The pallet rack had a link cart system that linked the carts together and ensured the load wouldn’t come loose and fall into the aisles. Advance also arranged to ship the products intermodal rather than simply using flatbeds for road transport, which saved Allan Brothers time and money on freight. A project more than six years in the making just ripened with age.